As most of the NAV fans know #NAVDirections is underway in US. Even though I could not participate to it (Next year for sure), there are so much of information flowing about Microsoft Dynamics NAV 2017 and Dynamics 365.
Daniel Rimmelzwaan and Saurav  has shared many details about the new announcement and I have added the link on their feeds. Just check on those and you will see many updates released in the ongoing Direction.
Following are some of the eye catching headlines that I wanted to share in my blog.
Dynamics NAV 2017 Released Date 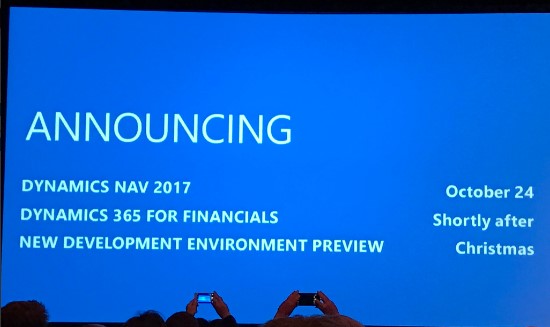 Microsoft will release the Microsoft Dynamics NAV 2017 on 24th of October and I think it will be a major release with lot of new functionalities. (Wait for it!!)
New Development Environment
Last time (Microsoft Dynamics NAV 2016) Microsoft gave a brand new development environment to us and it was really great as per my view. Even though it take out some memory of the computer. However the new release will be much more exciting.. Why? Because this time Development Environment will be in Visual Studio!!  It will be a Christmas present to all the Dynamics NAV Developers around the world from Microsoft. 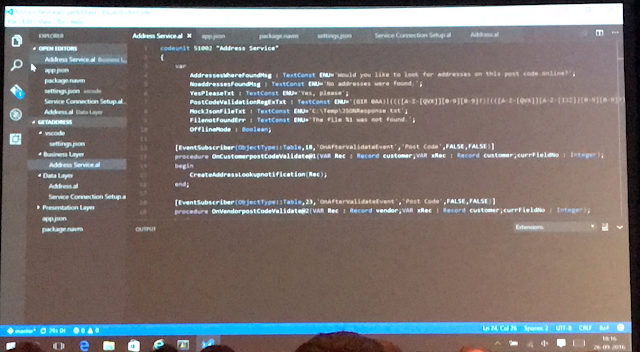 Extensions Extended
Microsoft Dynamics NAV 2017 have more extended with new extensions. Earlier it was Tables, Pages, MenuSuites, Codeunits and Action Items were supported. In Dynamics NAV 2017 more items have been added to list. Reports, Queries and XML are also included in the new list.

All the images and details are taken from below feeds and please go have a look on those for more info. Directions | Daniel Rimmelzwaan | Let’s Talk NAV  | Saurav Dhyani

Please provide your feedback with a comment.
Thank you and Regards,
Tharanga Chandrasekara